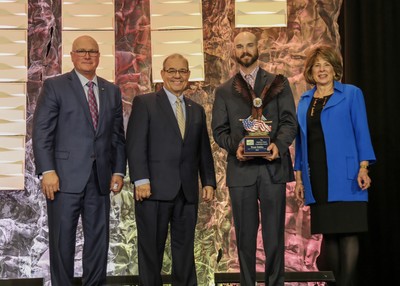 Dabbs, 40, has served on Arkansas County’s board of directors and is presently its county president. He is also a graduate of Farm Bureau’s President’s Leadership Council and was the former chair of the Young Farmers & Ranchers state committee. He was taken by surprise when his name was called during the award presentation.

“I’m very excited. It was a surprise that I wasn’t expecting,” Dabbs said. “It feels good to be recognized for your leadership and service to Farm Bureau.”

The Stanley E. Reed Leadership Award was established to honor the memory of the late Arkansas Farm Bureau president and is awarded to an active member, 36 to 45 years of age, for outstanding leadership within their county Farm Bureau and community. It is intended to honor a county leader who has demonstrated the leadership qualities that were evident in Stanley Reed’s life and will help lead Farm Bureau into the future.

Dabbs is a fourth-generation row-crop farmer south of Stuttgart. He grows corn, rice and soybeans on 3,000 acres with his father, Terry, a Farm Bureau state board member. His favorite crop to grow is corn.

“Being from eastern Arkansas everybody would expect me to say rice. Rice is the most challenging and most rewarding for putting all of the time and effort to get it out,” Dabbs said. “Here, recently, we’ve really got into growing corn. I really like doing it. It’s something different. It’s one of those crops that you better get it right to start with. I like the precision of it.”

Trent and his wife Kristian have two children, Finlee, 7, and Erin, 3.

Arkansas Farm Bureau is a nonprofit, private advocacy organization with almost 190,000 families throughout the state working to improve farm and rural life.