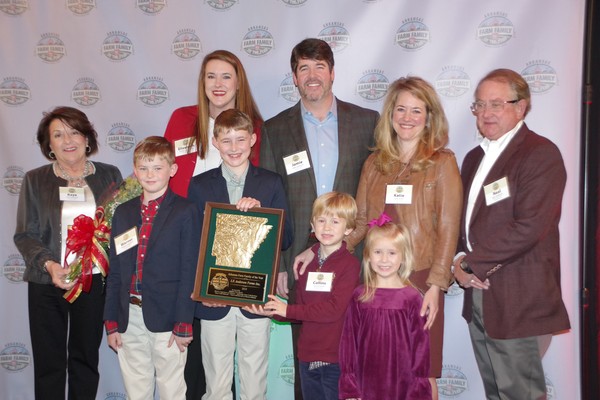 The Anderson family and their award.

I.F. Anderson Farms Inc., of Lonoke (Lonoke County) is the 2019 Arkansas Farm Family of the Year. The honor was announced today at the annual luncheon honoring the county and district Farm Families of the Year.

Anderson Farms is the nation’s largest baitfish hatchery, raising 1.3 billion fish annually on 3,334 water acres. It is a fourth-generation fish farm presently run by James Neal Anderson and his son Jamie. The business employs 45 people and ships to more than 40 states annually. The Andersons were humbled and surprised to receive the honor.

As Arkansas Farm Family of the Year, the Andersons will compete with nine other southeastern state winners in the 2020 Swisher Sweets/Sunbelt Expo Southeastern Farmer of the Year program next October in Moultrie, Ga.

“This is such an honor,” said Jamie Anderson. “We don’t do this for recognition. We do it because we love it, it’s in our blood and our DNA. It’s our heritage. That’s why we do this.

“My granddad and great granddad, they didn’t see this 70 years down the line. Seeing this honor and the fifth generation standing here. Thinking of them and this honor is a pretty amazing feeling.”

Since its inception in 1949, Anderson Farms is well known for its water conservation practices, its innovative approaches to breeding, raising, marketing and shipping baitfish and developing and manufacturing equipment for the aquaculture industry. They’ve also worked with other growers to help develop national industry inspection standards for transporting baitfish across state lines. One of the farm’s major successes was its development of the Black Salty, a freshwater-reared baitfish targeted for the saltwater fishing market.

Neal Anderson is proud of his work and dedication to water conservation. They strive to reuse as much farm water as possible by pumping and gravity flowing it from pond to pond before ever releasing it. The use and reuse of surface water is key to conserving groundwater.

Jamie, 43, has worked on the farm since he was 12. His work in day-to-day operations includes employee management, customer relations, production management, shipping, health inspections, permitting requirements and depredation control. In 2019, he was the first recipient of the Mike Clark Aquaculture Farmer Leadership award from the National Aquaculture Association.

“We congratulate the Andersons on being named the 2019 Arkansas Farm Family of the Year,” said Arkansas Farm Bureau President Rich Hillman, a rice farmer from Carlisle. “They have established themselves in the aquaculture industry as the unrivaled leader in baitfish production.

“Fishing enthusiasts may not realize Anderson Farms is the nation’s leading producer of golden shiner minnows. Most of the baitfish purchased at bait shops across the country are raised right here in Lonoke, a fact we are very proud of.”

The Farm Family of the Year program, now in its 72nd year, is the longest-running farm family recognition program of its type in the United States. It begins with selection of the top farm family in each county. Then, eight district Farm Families of the Year are selected. The competition is judged on production, efficiency and management of farm operations, family life and rural/community leadership and values.

Anderson Farms was selected from the eight 2019 District Farm Family of the Year winners, which included:

Arkansas Farm Bureau is a nonprofit, private advocacy organization of more than 189,000 families throughout the state working to improve farm and rural life.