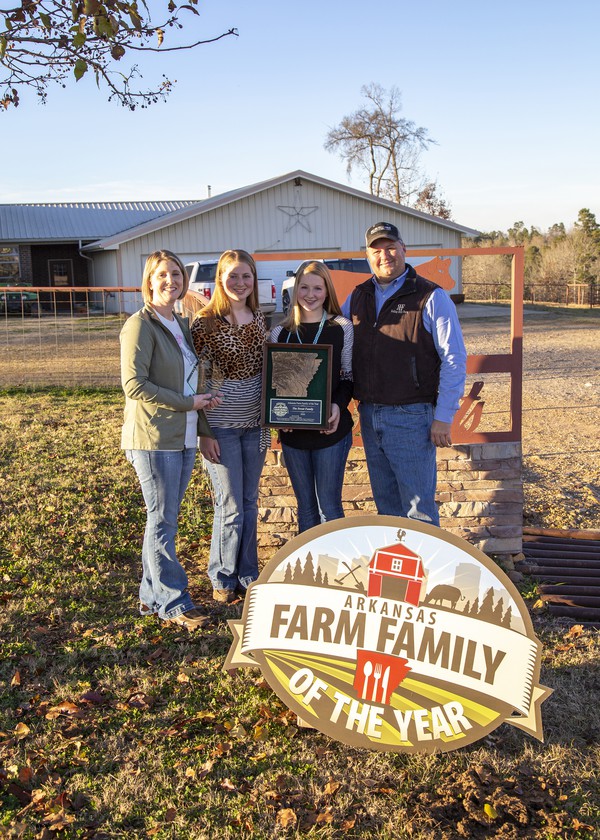 Chris and Denise Sweat of McCaskill (Hempstead County) are the 2020 Arkansas Farm Family of the Year. The honor was announced today during a virtual event honoring the county and district Farm Families of the Year.

Chris is a fourth-generation farmer and he and Denise have been farming together for 23 years. Chris is founder and co-owner of the Sheep and Goat Buying Station in Hope. The station was established in 2009 and has helped grow the sheep and goat industry in southwest Arkansas, marketing approximately 3,000 sheep and goats annually. Their registered seedstock are marketed and promoted by livestock shows and the majority of the Sweat’s registered cattle are sold to Texas 4-H and FFA members as show projects.

“It’s a great honor,” Chris Sweat said after the announcement. “It makes me think of all the Farm Families of the Year before us – some of them were great mentors for us. It was great just be selected as the Hempstead County Farm Family, then to go on and be our District winner was even more overwhelming to us. To learn we were chosen as the state Farm Family winner is just very humbling.”

As Arkansas Farm Family of the Year, the Sweats will compete with nine other southeastern state winners in the Swisher Sweets/Sunbelt Expo Southeastern Farmer of the Year program in Moultrie, Ga.

“We congratulate Chris and Denise Sweat on being named the 2020 Arkansas Farm Family of the Year,” said Ashley Wallace, state coordinator for the Farm Family of the Year program. “This has been one of the most challenging years for Arkansas farmers and ranchers because they’ve had to deal with disruptions caused by the pandemic. The Sweats have demonstrated resiliency by persevering through these challenges, while continuing to build their business and serve the farming and ranching community of southwest Arkansas.”

Due to the ongoing pandemic, this year’s official Farm Family of the Year announcement was made virtually and video of the event can be viewed at www.arfb.com/farmfamily.

The program, now in its 73rd year, is the longest-running farm family recognition program of its type in the United States. It begins with selection of the top farm family in each county. Then, eight district Farm Families of the Year are selected. The competition is judged on production, efficiency and management of farm operations, family life and rural/community leadership and values.