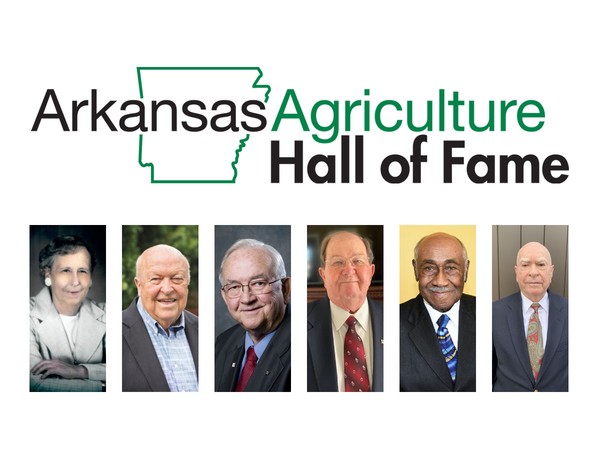 The Arkansas Agriculture Hall of Fame plans to induct six individuals whose leadership and service have brought distinction to the state’s largest business sector.

The newest inductees include ag aviator and longtime chairman of the Arkansas State Plant Board George Tidwell of Lonoke; Tuskegee Airman and retired Cooperative Extension agent Thomas Vaughns from Marianna; and Gene Woodall, a retired University of Arkansas faculty member who paved the way for crop yield increases by creating verification programs that are now emulated around the world. Additionally, posthumous induction will occur for timber landowner and philanthropist Jane Ross of Arkadelphia; Gene Sullivan, who served as state conservationist in three different states and guided key water management programs; and the late cattleman and banker Leo Sutterfield of Mountain View, who served as chairman of the Arkansas Beef Council and a member of the Arkansas Farm Bureau board of directors.

Induction ceremonies for Class XXXIII will be held Friday, March 6 at 11:30 a.m. at the Embassy Suites ballroom in Little Rock.

“What a marvelous class of inductees who reflect the broad and dramatic impact of agriculture across the state of Arkansas,” said Butch Calhoun of Des Arc, chairman of the Arkansas Agriculture Hall of Fame committee. “The six included in class XXXIII include many different areas of agriculture, including production, research, aviation, stewardship and community leadership.

“I have said this before and it bears repeating; agriculture is one of the great success stories of our state, and that is sometimes overlooked in today’s society. We are pleased to bring recognition to these individuals who have impacted our state’s largest industry in such a positive way.”

The new selections will bring to 175 the number of honorees in the Arkansas Agriculture Hall of Fame, begun in 1987.

The mission of the Arkansas Agriculture Hall of Fame is to build public awareness of agriculture and to formally recognize and honor individuals whose efforts have led to the prosperity of local communities and the state.

Luncheon tickets are $35 each. Individual tickets and tables of 10 are available by calling (501) 228-1609 or emailing aghalloffame@arfb.com. Online reservations can be made at http://bit.ly/AgHallTickets.

Gene Sullivan, Lonoke
Albert Eugene “Gene” Sullivan spent a career creating and implementing soil and water management, conservation and reclamation projects that impacted farmers and ranchers. He served as Deputy State Conservationist in California and State Conservationist in Nebraska, Mississippi and Arkansas. A native of Lonoke, Sullivan earned a degree in agricultural engineering from the University of Arkansas, and immediately went to work for the USDA Soil Conservation Service. Sullivan passed away on Sept. 4, 2017. His son, Mike, now works for USDA as Arkansas State Conservationist. Click here for full biography.

Leo C. Sutterfield, Mountain View
Leo Sutterfield was a cattleman, a businessman and an advocate for his hometown of Mountain View and the rural areas of Arkansas. Sutterfield served nine years as chairman of the Arkansas Beef Council and was an Arkansas representative on the Cattlemen’s Beef Board, the national administrative body for the beef checkoff program. In 2005, Sutterfield was honored as Distinguished Citizen by the Mountain View Area Chamber of Commerce. The McCallister-Sutterfield Farm was designed as an Arkansas Century Farm during the program’s first year in 2012. When Sutterfield passed away on Sept. 13, 2017, his community and the state lost a dedicated advocate for rural Arkansas. Click here for full biography.

George Tidwell, Lonoke
As a boy while growing up on a cotton, corn and peanut farm in north-central Florida, George Tidwell watched Air Force pilots from a nearby flight training school and dreamed of becoming a pilot. That dream led him to an aviation career that ultimately brought him to Arkansas in 1960 to work in agricultural aviation. He started Tidwell Flying Services in 1964, which grew to became one of the country’s most advanced and progressive ag aviation enterprises. Tidwell has held all 4 offices of the Arkansas Agricultural Aviation Association and secretary of the National Agricultural Aviation Association (NAAA). He served 11 years on the Arkansas Aeronautics Board, serving as chairman twice. Click here for full biography.

Thomas Vaughns, Marianna
Thomas Vaughns has seen a lot in his 99 years, as a member of the famed Tuskegee Airman during World War II and a veteran of the Korean War, as a 20-year county extension agent, as horticulture specialist at the University of Arkansas at Pine Bluff for 14 years. His agriculture career began during the days of segregation, continued through the Civil Rights Era and continues through board service and his regular advice to others who seek his wisdom. Click here for full biography.

William E. (Gene) Woodall, Little Rock
Gene Woodall’s impact on cotton farmers in Arkansas can be measured more easily in millions of pounds of yield increase rather than dollars and cents, which is simply incalculable. As the creator and driving force behind the Cotton Research Verification Trials, Woodall delivered meaningful benefits to cotton farmers through efficient and profitable production methods. He helped revive cotton as a profitable crop for Arkansas farmers, who had seen cotton acreage drop by more than 75 percent between the 1950s and late 70s due to low productivity and profitability challenges. Click here for full biography.