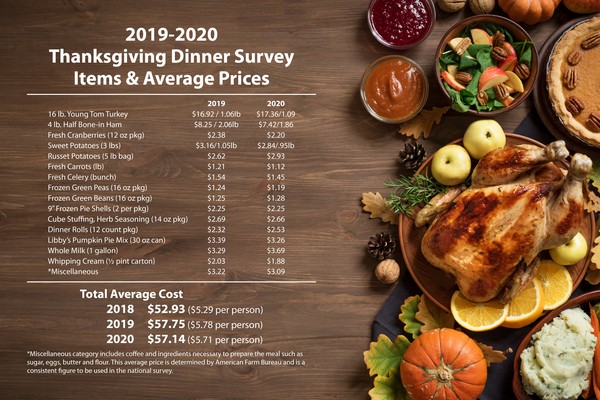 For the second year in a row, the average cost of the classic Thanksgiving meal reflected a modest decrease, according to Arkansas Farm Bureau’s 35th annual survey of items included in the holiday feast. This year’s meal will cost $57.14 for a family of 10, down 61 cents from last year’s average of $57.75.

“Ham prices saw a decrease on a per-pound basis of 20 cents, which can be attributed to record pork production and a six percent decrease in wholesale prices,” Lambert said. “Also, freezers saw a 32-percent decrease from a year ago in their bone-in ham stocks. Turkey prices increased by three cents per-pound, which was due to higher wholesale prices and inventory in freezers almost equal to a year ago.”

According to Lambert, disruptions in the second quarter due to covid-19 outbreaks in poultry processing plants had very little impact on turkey stocks.

“That American consumers continue to be able to prepare the meal for less than $6 per person is testament to the efficiency of our farmers and ranchers and despite the pandemic, providing them access to affordable food for the holiday season,” he said.

The statewide average is based on responses from members of the Arkansas Farm Bureau Women’s Leadership Committee and other volunteers who surveyed food prices at 10 grocery stores and supermarkets across the state. They were asked to report the “best in-store price” of 15 items included in the meal and are allowed to take advantage of advertised specials, excluding discount coupons and purchase requirements.

“This has truly been a challenging and unusual year for all Americans,” said  Arkansas Farm Bureau president Rich Hillman. “Yet, despite the pandemic and disruptions in the supply chain earlier in the year, we continue to have the most affordable and abundant food supply in the world. Our farmers, ranchers and those in our food production and delivery system have worked tirelessly to ensure our families have access to the nutritious, abundant food they’ve come to expect. As we do each Thanksgiving, many families and charitable organizations will share the meal with those who are not as fortunate, and that is truly reason to give thanks,” Hillman said.

Though unscientific, the survey is intended to be a snapshot of actual prices across Arkansas and the nation. The survey period was Oct. 30 – Nov. 12.