The roughly two-month dry period during the summer of 2022 has been the worst drought in 10 years. While it has had an impact on all Arkansans, the drought has hit livestock and hay producers across the state especially hard. Livestock such as cattle, horses, sheep, goats and llamas rely on forages (grass, hay and other plants) for most or, in some cases, all of their diet, and this year’s drought has caused significant loss of forage availability statewide. 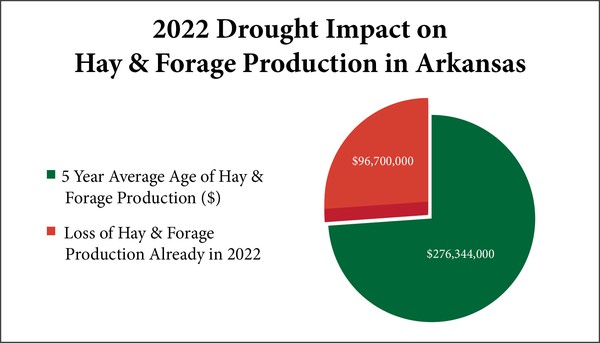 The months of June and July have been some of the hottest and driest months in the 21st century. A collaborative analysis conducted by economists at the University of Arkansas and Arkansas Farm Bureau resulted in a preliminary estimate of more than $95 million worth of grassland and hay lost so far this year due to drought. This is equivalent to more than 1/3rd of the of the typical average forage production across the state. The complete report with more comprehensive data is now available on the website of the University of Arkansas Fryar Price Risk Management Center of Excellence.

What does this mean for Arkansas livestock producers?

The shortage of grass and hay is already affecting Arkansas farmers. Beef cull cow sales across the state have increased 20% over the same period last year, according to James Mitchell, University of Arkansas extension livestock specialist.

A recent University of Arkansas county extension agent survey conducted by John Jennings has shown that the average farmer has between 30-50% of their hay needs for the winter met right now. However, due to the current lack of grass, some farmers have already begun feeding hay to their animals. Every bale of hay that must be fed in July and August is one that they will not have available to feed this winter when grass does not grow.

This is especially important because livestock rely on hay as their primary source of nutrition. Even if conditions return to normal the impacts from this drought will be felt throughout the fall and winter months. If conditions do not improve many farmers will be faced with a difficult choice: Sell off cattle because the lack of grass does not support their nutrional requirements or take on higher input costs by trucking in hay. Because the drought has been felt statewide and across much of Missouri, Texas and Oklahoma, sourcing hay will be extremely difficult. Farmers will have to look further and further away to find hay to purchase and will be forced to compete with other farmers from across all drought-impacted areas. Beyond the purchase of hay, the current high diesel prices will increase the price farmers must pay to get the hay to their farms.

If farmers chose to sell their animals, they will be selling them into a market that is weighed down with a large influx of animals being sold for the same reason, which means prices will be low and farmers will not receive compensation equal to what their animals are worth.

What does this mean for the consumer?

For the time being, there will likely be little change in beef prices in stores. Many animals are currently hitting the market and moving through the supply chain. However, the resulting decrease in total herd numbers from the increase in liquidations will lead to a reduction in the future supply of beef in the U.S. There will be fewer animals reproducing and thus fewer animals to feed out, leading to a classic supply and demand challenge. As the supply drops the price will rise, resulting in fewer people able to afford beef. The good news is this has happened before, and the national herd of cattle will rebound in time, bringing prices back in line.

How did we get to this number?

The estimated drought impact was reached by taking into consideration the average total harvested acres in the state (1,241,438 over the last five years), the number of counties impacted by drought (75 total, of which 26 were in extreme drought, or more than 1/3 of the state), the typical amount of forage produced during the months the drought occurred, and current market valuations of forages provided by Livestock Marketing Information Center. A broad range was produced using different scenarios of impacts with $96.7 million being the average of all scenarios.

What are the long-term impacts?

Herds are currently facing a 20% increase in Cull Cow liquidation; this means that there is an additional 20% of cows (female cattle that produce calves) being sold that would normally stay on the farm. Factors including reduced future calf crops, likely increased future replacement prices, and the long cycles associated with cattle reproduction and maturity will all combine to result in a multiyear process for producers to rebuild their herds to pre-drought levels. During this process not only will producers feel the impact from producing 20% less calves, but they will also have to hold back more of the calves they do produce back in order to rebuild their herds. These factors will all likely attribute to an impact larger than today’s 20%, over the next 5 years.