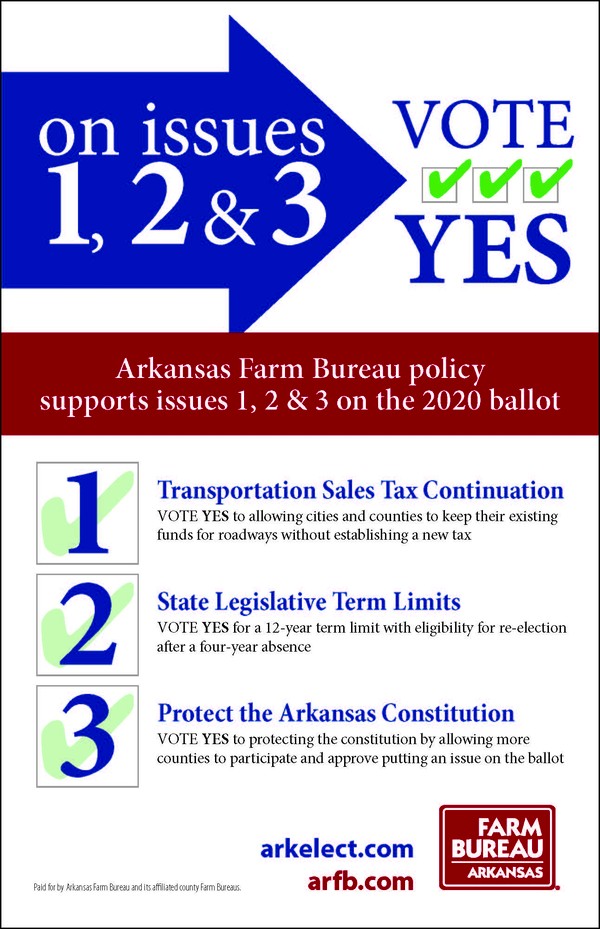 The Importance of Ballot Issue 3

You have an opportunity this November to expand the voice of rural Arkansans with a vote FOR ISSUE 3. Adding to or changing the Arkansas Constitution should be a very serious process that takes into account voices and opinions from across the state, not just major metropolitan areas.

Here’s what Issue 3 does and does not do:

Issue 3 ensures adding amendments to the Arkansas Constitution will be a serious and inclusive process. Arkansas has some of the most lax requirements in the country for putting measures on our ballot —making it easy pickings for national special interest groups. With Arkansas’s small number of media markets, it’s very inexpensive for groups outside of the state to “buy their way” into the Arkansas Constitution. We have seen this happen several times in recent years, where heavily funded outside interest groups poured millions upon millions of dollars into the state to get something placed on the ballot and passed.

During the 2019 legislative session, Arkansas legislators recognized that 60 counties were regularly left out of the process and the people of these counties never got a chance to have their voices heard about what should or shouldn’t be on the ballot. This amendment does nothing to increase the number of unique signatures required; instead this simply allows these “flyover counties” to play a roll in this important process.

For more than 85 years, Arkansas Farm Bureau has supported the people of rural Arkansans and advocated on their behalf. Today, we have numerous groups fighting against giving additional counties the opportunity to approve measures for the ballot, because they don’t feel it’s worth spending the additional money and effort to take their proposals outside the cities to rural Arkansans. These groups think citizens outside of urban areas don’t deserve a voice in what is put on the ballot in November. We at Arkansas Farm Bureau strongly disagree and that’s why we support Issue 3.

This initiative will also increases the legislative threshold to place an amendment on the ballot. Currently, a simple majority vote is all that is needed, so this amendment would raise the requirement to 60% of the State House and Senate members.

Issue 3 builds a layer of protection around the Constitution and provides a voice to the too-often ignored residents of rural Arkansas. Changing the Constitution should be a serious process, and this measure ensures initiatives on the ballot are worthwhile and meaningful to the Arkansas people. It's the Constitution – it shouldn't be easy to change, and it's not for sale.